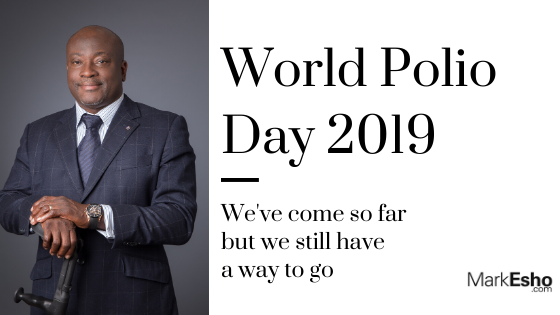 Today marks World Polio Day 2019 – a day created by Rotary International to celebrate the work they have done for the past 30 years to eradicate polio throughout the world. Back in the late 1960s, I was hit by a stroke of bad luck that would impact my life as I knew it forever. I was five years and living with my foster parents, Mr and Mrs Archer in rural Leicestershire when one evening I woke up with the pressing need to go to the toilet. I called for Mrs Archer, went to the toilet and then snuggled back into bed. But before long, my whole body started convulsing in a fit and I was immediately taken to hospital. I had gone from a happy, mobile child without a care in the world to becoming paralysed overnight. I cried for the shiny, red bike that was waiting for me at my foster home, lying totally unused in the garage. At first, doctors and nurses alike were at a loss as to what had caused me to fit so violently. After numerous tests, they found out that I had contracted the poliovirus. At this point, the virus was meant to have been eradicated from the UK. Hospital staff were at a loss as to how I had caught it – meanwhile, all I could think was, if it was meant to have been eradicated, how unlucky did that make me? Through a simple error of communication, my birth mother had thought Mrs Archer had taken me for the vaccination and vice versa. The poliovirus begins in the intestines, and in over 90% of cases, it remains there. In most cases, it leads to a lifetime of natural immunity and leaves no lasting damage. However, in less than 2% of sufferers, the virus invades the nervous system, attacking and damaging the anterior horn cells of the spinal cord. These cells belong to the motor neuron system which causes paralysis in many sufferers. I was part of that 2%. You can hardly scarce to imagine what it’s like to go from a child without a care in the world to a talking head in a hospital bed – quite literally overnight. Though I recovered from polio extremely well (doctors originally gave me a 10% chance of survival) the hangover it left on my physical and mental health, and the treatment I received from others as a result of my disability has impacted my life every day since. And although we have come so far when it comes to eradicating polio for good, there are a number of issues that make me realise that we still have a very long way to go.

Polio is still not completely eradicated around the world

Many people think that the poliovirus is completely eradicated, but you may be surprised to learn that polio has never been completely eradicated. Despite Rotary International’s work to reduce cases of polio by 99.9% since 1988, the virus is still prevalent in Afghanistan and Pakistan and until every child in the world has been vaccinated against it, they are still at risk. Polio mainly affects children under the age of five and from my story alone, you can see that the effects can be absolutely devastating. There is no cure for polio, but the disease can be prevented using a vaccination. The western world has been lulled into a false sense of security – but it’s still essential to vaccinate your children Due to media scares around vaccines, parents in the western world are becoming less and less likely to vaccinate their children. Many people wrongly believe that vaccinations can cause things like autism in children, but there is actually no solid evidence to back up this claim. Now is not the time for scaremongering – many people don’t realise that if all polio vaccinations were stopped tomorrow, within 10 years we would see as many as 200,000 new cases of polio around the globe. We owe it to our children, their children and every future child to do our bit to eradicate polio for good.

How you can help

You can help the fight to end polio in a number of ways. First of all, share this story amongst your networks on social media. The first step toward creating meaningful change is education and I hope this blog has gone some way in educating you on polio, its devastating effects and what you can do personally to help. If you want to go even further, Rotary International encourages you to take three simple actions that will take just three minutes of your time to help eradicate polio. Step one, is to learn about polio and discuss it in your local community. Step two is to share news of the work they’re doing on your social media accounts. And step three is to donate towards the cost of vaccinating children around the world. Every pound that is donated will be tripled by the Bill and Melinda Gates Foundation. A simple £20 donation could, therefore, buy 75 vaccine carriers. Often we feel that, as individuals, we can’t have much impact on the affairs of the world. But together, we can collectively achieve so much. Click here to take the three simple steps and do your bit to help end polio for good and join in the conversation on social media using the hashtag #endpolio